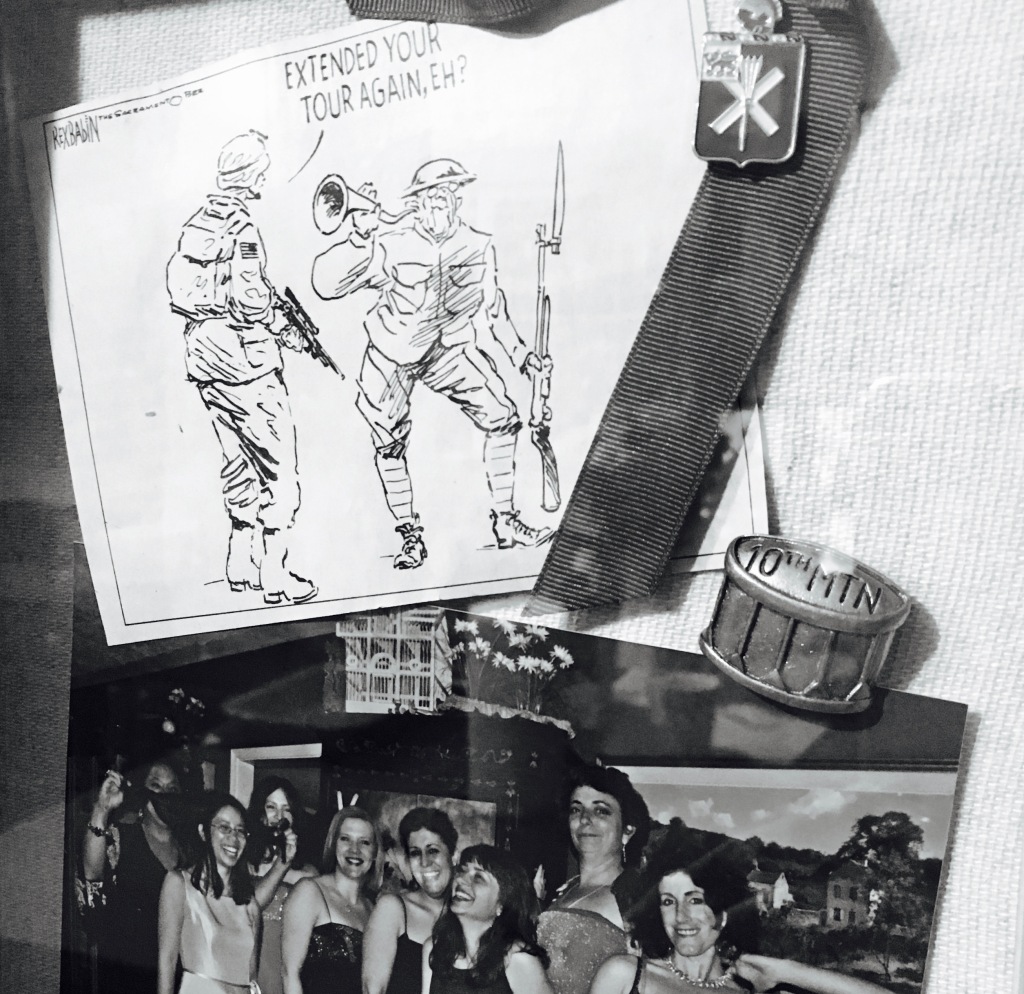 A decade ago, our military was facing a dizzying  op-tempo, coupled with the kind of violent warfare that my family, and many other young Army families in the regular combat arms community, had not been exposed to quite so intimately before. I have felt comfort in reading stories from other military spouses processing their most galvanizing deployments from that time. Stories in which I saw echoes of my own experience. One of the great dichotomies of the military spouse community is that while spouses have so much in common with each other, we possess even more that serves to make us unique. For this reason, our individual stories are important. I respectfully add this small piece of my own story to the greater anthology. I use “we” frequently in this post–this is the “we” I felt part of at this exceptional time in my military spouse experience, and is not meant to be definitive.

In early 2007, my Against All Odds sisters and I thought we were winding down a brutal deployment.

We were weary. We were exhausted from a steady barrage of gut wrenching news, memorial services, and incident briefings.

We were tender. We were bruised from constant worry, from caring for everyone except ourselves, and from shouldering a great emotional burden that was impossible to set down.

And, we were fiercely resilient. Which was a very good thing, because just as we thought we could begin to relax and think about homecoming, the U.S. Office of the Secretary of Defense announced the extension of our soldiers for an additional four months of deployment.

I had just seen my Vagabond Soldier in December. He’d been deployed eleven months by the time he was able to take leave, and we wondered whether it was even worth it at that point. We were so close to the deployment’s end, we wondered if it would be emotionally harder and more disruptive (for us and for our young son) if we were to take a knee for a break so close to the finish line. By that point in the deployment, we were also superstitious about every decision we made: were we asking to be that tragic couple in the movie where you just know the poor soldier who just came back from seeing his wife and kid is going to step on a land mine within seconds of being back in the combat zone?  In the end we decided that the opportunity to see each other, like life itself, was a precious thing and not to be wasted. Our leave was quietly glorious. We watched Star Wars movies and Animal Planet, and played in the deep snow of Northern New York. And, best of all, I watched my husband sleep soundly, safe for the moment from IEDs, rocket attacks, and bad guys.

A little over a month after leave ended, as the brigade’s torch party and another battalion were just beginning to head home, and around the time our battalion families were receiving tentative dates for homecoming, I got a call–a vicious, sucker punch of a call. There was going to be an extension. We’d get more news soon. There would be a town hall meeting.

I’d been writing in a journal throughout the deployment. Originally with the intention of giving the journal to my husband when he came home to share daily stories of charming things our son did and my adventures in house renovation. I am a glass-half-full-kind of girl, whose prolific and honest journal entries about the wonder of everyday things are evidence that I was not just “surviving” but “thriving” through deployment. It was a mindset a number of us adopted–a little everyday Pollyanna mixed with a heavy dose of dark cynicism at the larger goings-on of the world. Mostly, I wrote about everyday things I wanted to share with my soldier: the first crocus peeking out of the snow; our son sledding like a maniac down the “big hill” with bright red cheeks; my success in installing a new floor in the upstairs bathroom. Looking at those entries a decade later, I find them conversational and chatty, and hovering somewhere between sucking-the-marrow-out-of-life passionate and pragmatically zen. My journal entry the day of the phone call was quite different:

I am so tired.

Not sad. Or angry. Or anything. Just empty. Clinging to what I remember of my brave and solid self until I find her again.

This isn’t some sad story about slowly fighting my way back to sanity. I found my brave and solid self quickly, with blunt force, in the faces of my sisters during the emotional cacophony of our town hall meeting. I found bravery in our honesty, tears, anger and unapologetic disappointment. I found solid footing in our grit and gallows humor–and in the pragmatism of the questions we posed. We were not a stoic group, but we had more than enough practice at dealing efficiently with the unthinkable to let this sucker punch keep us down for long.

I regained my equilibrium  though the sheer strength I saw in the people around me. I don’t believe things in life happen to us to provide us with lessons, but I do believe that we have a choice to learn from everything that happens to us. What I learned from laughing, crying, caring, and sucking it up and driving on with the badass sisters of the CHOSIN, Against All Odds, battalion was to live deliberately every second of this life that you are given, because life is too damn short and too damn beautiful not to. It is as simple and as profound as that.

The picture featured in this post is of a shadow box that hangs in my kitchen. It holds a 1-32 Infantry ‘Against All Odds’ charm, a Fort Drum pin, a political cartoon from the time of the extension, and a photograph, c. April 2007, of a handful of the phenomenal people who helped me find moments of joy in the most worrisome of times.

The U.S. Secretary of Defense, Robert Gates, and the Chairman of the Joint Chiefs of Staff visited Afghanistan January 17th promising to provide the resources U.S. commanders need to defeat the Taliban and ensure security and stability in Regional Command East in support of the ISAF mission.

“Secretary Gates and General Pace asked us, ‘What do commanders on the ground need to win?’, and we told them an additional maneuver battalion, addition forces on the border and a theater tactical reserve,” Freakley said.

The extension of 3rd BCT immediately satisfies that requirement with a U.S. commitment to seek a long term sourcing solution yet to be determined. The actual employment of this increased combat power will be determined by ISAF and RC East commands.

“I understand and respect that this news will be taken hard by some members of the Task Force Spartan family team, but they have been responsible for so much positive progress here in Afghanistan and I know the Spartans will take this in stride and together with 4th Brigade, 82nd Airborne, Task Force Fury, they will make a significant impact on the mission during this 4 month extension.”

The Department of the Army will send a Tiger Team to Fort Drum to identify ways to resource additional support to the families of 3rd Brigade Soldiers for the four month extension. General Freakley has also charged the Fort Drum staff to double their efforts to support the soldier’s families.

“This extension is necessary to demonstrate to the Taliban that pressure on them will be unrelenting and to show the Afghan people that the United States of America is fully committed to the security of their nation and the assurance of their freedom,” Freakley added.

The 3rd Brigade Combat Team has been deployed to Afghanistan in support of Operation Enduring Freedom for 11 months. Their four month extension will allow them to support security operations along side the 4th Brigade, 82nd Airborne Division to promote stability and security in Afghanistan.