The Orphan in My Family Tree, Part 8

This is Part 8 of The Orphan in My Family Tree. It is the true tale of my ongoing search for the parents of my great great grandpa Fritz, who was orphaned in New York City in the late 1870s and sent, at the age of seven, to live with a foster family in Bow Valley, Nebraska.

The Thing About Research: Sometimes it is slow.

In December, I wrote about a newspaper article that seemed full of promise and exciting clues about the orphanage from which Fritz was possibly sent to Nebraska. Ironically, my last post included the statement, “I can’t wait to let you know more about each of these clues and the questions they invite.” It is May now, and it seems I could actually “wait to let you know more.” Sorry about that, dear readers. Below is the article I found through an online search of Newspapers.com from the May 18, 1881 Sioux City Journal, titled “Juvenile Immigrants.” The article, you may remember, spurred a number of questions, which I posted at the time. Those questions seem like a great place to begin sharing what I’m still in the process of discovering about Fritz, the Catholic Protectory, the Orphan Train movement, and New York and Nebraska in the early 1880s. 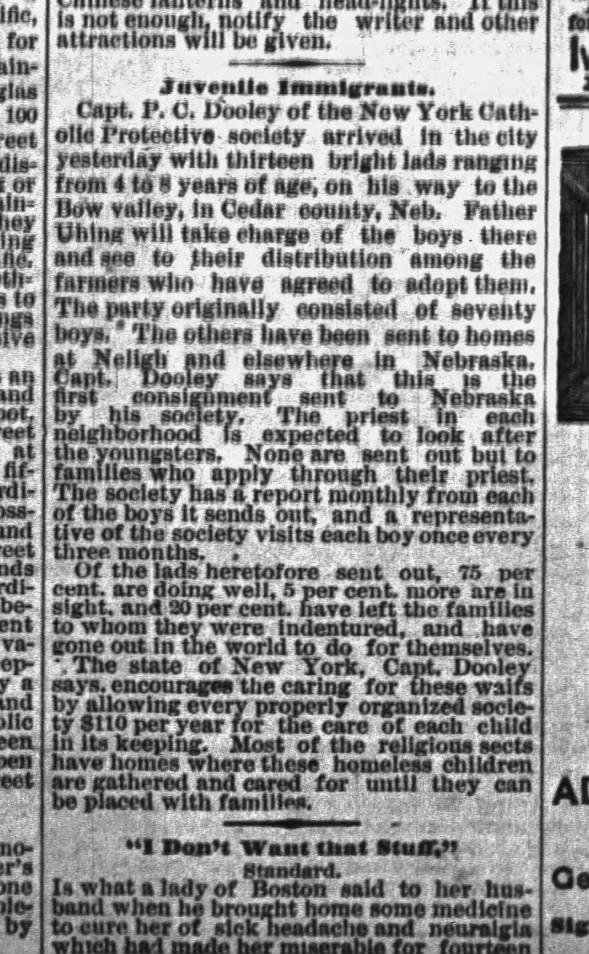 Who was Captain P. C. Dooley?

Captain P. C. Dooley was the Supervisor of the Bureau of Admissions and Discharges at the New York Catholic Protectory from sometime prior to 1877 through 1881. I am grateful to Captain Dooley for his detailed annual reports to the Protectory, and I am overjoyed that he included charts and data in his reports. Without these details, the newspaper article that hinted at Fritz’s connection with the Protectory may have appeared to be a dead end. I have a few notes about Captain Dooley, but have resisted going too far down this research path right now because there are so many other “rabbit holes” to jump into that are more directly related to my search for information about Fritz’s early childhood.

What seemed a mystery in December now seems quite clear: The “New York Catholic Protective Society” referred to in the Homeless Juveniles article is indeed the New York Catholic Protectory. Captain P. C. Dooley was the biggest connection clue initially linking the article and the Protectory, and further reading verified that the Protectory indeed sent Dooley to precisely this area of Nebraska at precisely the time this article was published for the purpose of placing homeless children with the German farm families who were settling there.

Are there records the society, or Protectory, have available online or that I could request?

There are records available for the Protectory, but like many orphanage records from this time period they are incomplete. Some resident’s records were lost to time, fire, or general mishaps. Records for some residents of the Protectory are available on the Family Search website and on microfiche at Family Research Centers. I have not found our Fritz in the online resident records, but have found those records invaluable to understanding the situations that led children to the Protectory. The records that do exist are detailed and will be a treasure trove of information for family researchers who find their ancestors therein. Though the picture painted by the records is often bleak, and the stories that emerge from those records are often heartbreaking, the records are personal and contain details basic municipal records do not. The records contain stories of families stricken by disease or poverty; reports of children arrested for stealing food; and letters from family members desperate to regain custody of children they don’t have the resources to care for.

In addition to the personal stories found in resident records, a great amount of general information about the Protectory can be found in the organization’s Annual Reports, as well as in research papers, and local histories–all of which it is possible to find examples of online. I was able to find a publisher through AbeBooks who prints (on demand) collections of Protectory Annual Reports. I purchased a book containing Protectory Reports for 1877 through 1883–a span of time a few years earlier and later than I suspected Fritz was at the institution. The book has been an invaluable resource for understanding the philosophy of the Protectory, the number of children at the institution, the daily routines and meals of the residents, and the health issues and epidemics (big and small) of orphanages of this time.

Will the Archives of the Archdiocese of New York have any information about this? (Reaching out to a librarian — in this case an archivist — is always a good idea!)

Consulting a librarian or archivist is always a good idea, but in this case the Archdiocese of New York did not hold the information I was looking for in their archive. The archivist suggested I reach out to the Lincoln Hall School, which inherited the records of the New York Catholic Protectory.

If I take another look at the Nebraska School Census records, will I find the other “bright lads” that went to Bow Valley in May 1881?

I took another look, and I did indeed find at least four of those other bright lads. I found them in school census records, in Captain P. C. Dooley’s annual admissions reports, and in the U.S. Federal Census of 1880 Schedule of Defective, Dependent and Delinquent Classes living at various orphanages associated with the Protectory. I also found clues for these “Bow Valley Boys” on the Cedar County, Nebraska Historical Society website. I found other children, too, who seemed to pop up out of nowhere and who may have been placed out through different agencies at different times.

Who is Father Uhing? Was he from the Bow Valley area, Sioux City, or somewhere else?

Father Frederich Uhing served as the first resident pastor of Saints Peter and Paul Church in Bow Valley, Nebraska. Father Uhing’s story can be pieced together with details found in family history stories available on Nebraska’s GenWeb site, Henry W. Casper’s History of the Catholic Church in Nebraska books, and The History of Bow Valley. Originally from Cleve, Germany, Uhing served much of his adult life on the prairie of Nebraska, traveling throughout Nebraska in his early career to offer mass and communion to pioneers as part of the Vicariate of Nebraska. Eventually settling down in Bow Valley, Father Uhing appears to have been instrumental in working with the Archdiocese of Omaha to place children like Fritz with families in northeastern Nebraska. Father Uhing settled in Bow Valley around 1877, and remained there until his death in 1892.

Will I find any of those “bright lads” from the article in the 1885 Nebraska Census if I search for family members listed as “orphan child” as Fritz was listed? Or perhaps children whose birthplace is listed as New York when the rest of the family was born in Germany or Prussia?

Fortunately for me, Cedar County Nebraska was not densely populated in 1885, and I was able to virtually “flip through” all of the records for the county on Ancestry. You can also access the 1885 Nebraska State Census at Family Search, but I have an Ancestry subscription and find their interface easiest to use for line-by-line browsing. Looking through the census records line-by-line gave me a better understanding of the interconnectedness of the small towns on the Nebraska prairie. I was able to find our “bright lads” living with various farmers in this small area of Cedar County, all of whom were early settlers of the area and founders of the Saints Peter and Paul Church in Bow Valley.

This is usually the space where you find resources and links for further exploration associated with the information explored in the post. This time, it is an invitation to check back again soon. In my next post, I will present the resources I was able to find about the New York Catholic Protectory. The Protectory deserves its own post, and I look forward to sharing what I’ve found with you–including a bit of evidence connecting our Fritz with the Protectory.