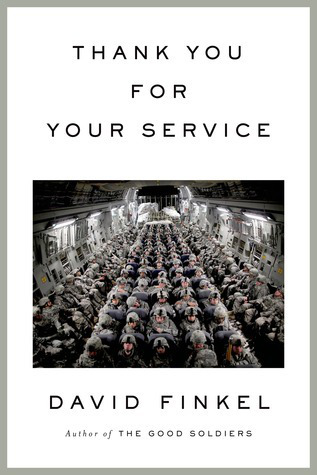 After finishing Extremely Loud and Incredibly Close by Jonathan Safran Foer, I felt brave enough to grab another emotional read from my ever-so-long-on-my-reading-list stack.

Thank You For Your Service by David Finkel has been in that stack for quite some time.

As a military spouse who has weathered my share of deployments, I just never quite know how this type of book will feel. I only know that this type of book is bound to hit close to home. I wonder. Will the book feel too optimistic? Too pessimistic? Too angry? Too trite? Will the author have laden everything with extra emotion and unnecessary melodrama? Because, seriously, there is really enough drama inherent in deployment and redeployment stories.

Thank You For Your Service was not optimistic or pessimistic, angry or trite. It was simply, overwhelmingly honest. Like, two boxes of tissues honest. Finkel tackles the people and their stories involved in this book eloquently, clearly, and with compassion. His writing is superb. He does not shy away from unflattering truth, but he nails an elegant balance in presenting the soldiers and the family members he covers as rich and complex people who are neither saints nor devils. Finkel presents the facts expertly and eloquently and then leaves the judgement calls up to the reader. The soldiers and families I spent the last two days reading about are so much like people I know. They are just people who are trying their best to cope with unimaginable and confusing feelings and situations.

Finkel isn’t telling every soldier’s story in this book, but he is telling stories that could potentially be about any soldier. Thank You For Your Service focuses on redeployment, PTSD, and people who were in situations that left them feeling broken. Finkel shines a light on some very personal and dark moments that people bravely shared with him. He also opens a small window for his reader to peek into the Army’s efforts to deal with these issues on a larger level, as of the writing of the book in October 2013, of course. For me, even when Finkel focuses on the big picture, he never allows us to lose sight of the individual stories that make up that picture.

Thank You For Your Service is a well crafted, personalized look at a topic that continues to deserve our attention.

Finkel has the following to say about the futility of making sense of it all:

You can listen to an interview with David Finkel from the October 1, 2013 episode of NPR’s All Things Considered by clicking the following link: Thank You For Your Service Follows America’s Soldiers Home

iThere are no comments