This Year is Different

A Story of Self-Censorship

As the dust finally settles from our latest move, I’m spending a quiet morning cleaning up my Facebook timeline and looking through my old posts. The themes of my posts and the posts I’m usually tagged in are personal, full of librarian stuff, and generally free of politics (though I am always passionate about intellectual freedom, which sometimes veers into political territory). Every year, I post about various holidays, special occasions, and national and international observance days. For me, this is a fun way to have conversations about local and global issues, as well as an enjoyable exercise in finding additional reference material to share with fellow lifelong learners. One of the days I post about each year is International Women’s Day, a day established to celebrate the achievements of women and to serve as a call to action to accelerate gender parity. This year, the responses I got to my post were different than in past years. And I let that difference lead me further down a road of self-censorship. 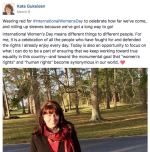 This year, my fairly innocuous March 8th International Women’s Day post garnered not just the few likes and “atta girl”s that those kind of posts usually do. This year my post also inspired a few not-very-nice private messages and one or two lost online friends. I don’t dwell on the lost “friends,” but I am sad that we have arrived at this place where people are not only quick to find fault and offense, but are determined to shut out all viewpoints they perceive to be different than their own. I haven’t been living under a rock. I’ve read The Filter Bubble. I am aware of the cacophony of discord that exists on social media and in passionate conversation, particularly during and immediately following election seasons. My reflections this morning are not about what I see in general (that type of observation is plentiful on the internet), but about the way I realized I let this discord influence my willingness to share ideas and information online.

I noticed while cleaning up old or redundant posts that I had started to share less and less on social media as we neared the presidential election last year, and that I hadn’t really started sharing again. I have always been around people for whom it was not appropriate to speak about personal political opinions in public–city government employees, educators, and active duty military people to name a few. The people in my circles, both while I was growing up and now, as an adult, have mostly been open minded and have definitely been well informed about politics and policy. And they have not seemed to have trouble sharing opposing opinions while staying friends. Until this year.

This year even posts that have nothing to do with politics seem politically charged. This year I’ve seen name-calling. Ugly name-calling. This year I’ve seen nasty “if you don’t like it, leave the country” ultimatums posted by people I once respected as reasonable and kind. This year there was a person who sent me an angry manifesto because they interpreted a high school lesson I shared about the responsible use of social media as an attack on free speech. Another person sent me an expletive filled message about the same lesson because they saw it as an attack on our president’s use of Twitter.

This year I see so many of my friends of different political persuasions desperately seeking kindness, understanding and clarity while so many others (also my friends) are lashing out with what I can only describe as a deep and ferocious anger. Depending on your political leanings, you probably pictured the “Other Guys” when you read about the angry people in that last sentence. If so, I’d encourage you to take a better look at whatever social media you follow and leave your bias aside when you do so. We can all do better. We need to stop working from the assumption that people who express different opinions than ours are Super Bad Other Guys. It’s not getting us anywhere. They are just people, many of whom are struggling, and most of whom want things to be better. These people envision different paths to getting to better, and have different ideas of what better looks like. In some cases, we have fundamental differences that do not allow for compromise. Surely though, dynamic and respectful discussion of those differences is better than shutting out any attempt at understanding. For me, one of the best things about our country is that there are so many of us with so many different ideas and perspectives. We are really a pretty amazing bunch–once we are willing to get past our own viewpoints.

There is quote I’ve had taped to my fridge for over two decades now that reminds me that if I want to maintain the right to speak and be heard it is important for me to extend that right to others–and to defend that right for everyone. Ironically, at the same time I wish everyone would practice a little more civility online, I vehemently support their right to not do that.

The realization that at the same time I’ve been championing freedom of expression in other platforms I’ve been censoring my own posts on social media is as paradoxical as it is timely. Considering this realization in the context of Banned Books Week has given me a fresh look at how easy it is to fall into the gray area between carefully selecting information out of a desire to share ideas and opinions and not sharing information out of a desire to avoid conflict.

The featured Noam Chomsky quote is from an interview by John Pilger on BBC’s The Late Show, 25 November 1992.

Join 390 other followers
My Tweets