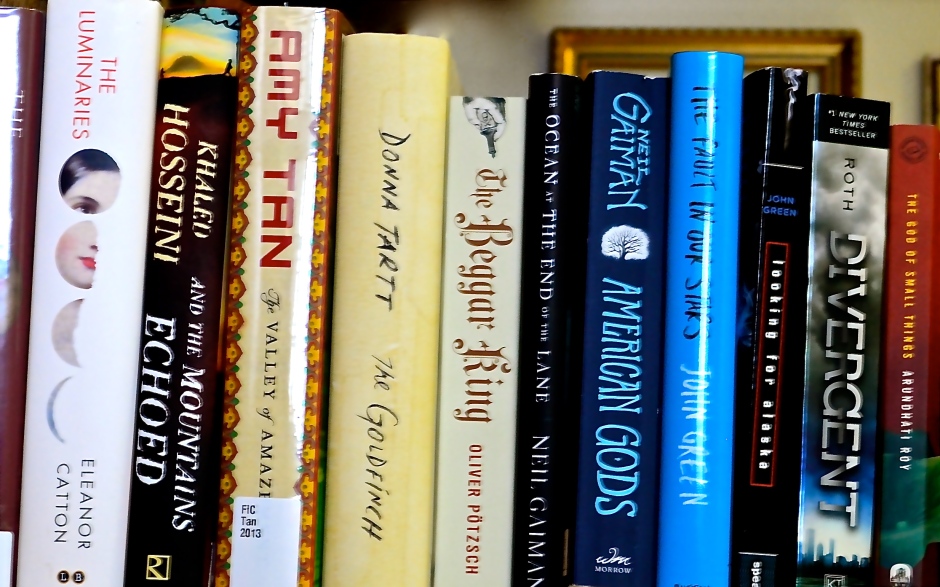 In early December, I thought I would post book reviews here every few days to keep my blog rolling through the weeks between fall semester and spring semester.  I knew I would read over the break–in spite of days of driving with car-sick cats, and days of unpacking, and weeks of getting to know my way around my new community I knew there would be time to read. And, while I am comfortable writing reviews for the purpose of describing how a book supports learning or literacy, I wanted to try my hand at the more personal and philosophical task of “here’s whether I like it and why” reviews.

After the first book, though, I didn’t want to write a review. My response to the work was too personal and I felt too connected to the book to share it. I felt positively selfish about the book, which was funny because one of the books I read during my binge actually contains a passage about just that feeling. After the second book, I also did not want to write a review. I’d found the book disappointing, and I know my friends (who are friendly enough to humor me by reading my blog) have almost unanimously declared the book “incredible and meaningful” and I did not want to muddle their authentic reactions and very real joy in the book with my persnickety aversion to a few literary conventions that simply don’t appeal to me.

Instead of reviews, I decided to post a passage from each book that spoke to me. I will tell you this: Each of these books was worth my time to read. They each have a particular magic of their own—I was able to brush against that magic in some of them and to immerse myself in that magic in others.

So, this is my un-review, with the books listed in alphabetical order instead of the order that I read them–accompanied by an indulgent glimpse into the magic I found on their pages:

Without individuals we see only numbers, a thousand dead, a hundred thousand dead, “casualties may rise to a million.” With individual stories, the statistics become people…We draw our lines around these moments of pain, remain upon our islands, and they cannot hurt us. They are covered with a smooth, safe, nacreous layer to let them slip, pearllike, from our souls without real pain.

And the Mountains Echoed by Khaled Hosseini

She keeps walking, the darkness around her like a mother’s womb, and when it lifts, when she looks up in the dawn haze and catches a band of pale light from the east striking the side of a boulder, it feels like being born.

We believe in ordinary acts of bravery, in the courage that drives one person to stand up for another.

The Fault in Our Stars by John Green

Sometimes, you read a book and it fills you with this weird evangelical zeal, and you become convinced that the shattered world will never be put back together unless and until all living humans read the book. And then there are books…which you can’t tell people about, books so special and rare and yours that advertising your affection feels like betrayal.

The Goldfinch by Donna Tartt

Even the memory was starting to seem vague and starry with unreality, like a dream where the details get fainter the harder you try to grasp them. What mattered more was the feeling, a rich sweet undertow so commanding that…all I had to do was sink into the blood-warm current and let myself spin away to the secret place where everything was alright.

Looking for Alaska by John Green

When adults  say, “Teenagers think they are invincible” with that sly, stupid smile on their faces, they don’t know how right they are. We think we are invincible because we are. We cannot be born, and we cannot die. Like all energy, we can only change shapes and sizes and manifestations.

The Luminaries by Eleanor Catton

Her carriage bespoke an exquisite misery, a wretchedness so perfect and so absolute that it manifested as dignity, as calm. More than a dark horse, she was darkness itself, the cloak of it.

The Ocean at the End of the Lane by Neil Gaiman

We sat there, side by side, on the old wooden bench, not saying anything. I thought about adults. I wondered if that was true: if they were all really children wrapped in adult bodies, like children’s books hidden in the middle of dull, long adult books…

The Valley of Amazement by Amy Tan

Before she was born, I believed she would be the girl I was supposed to have been. But she was not. She was her own self-being. How lucky I was.

Pictured, but still a read-in-progress: The God of Small Things by Arundhati Roy